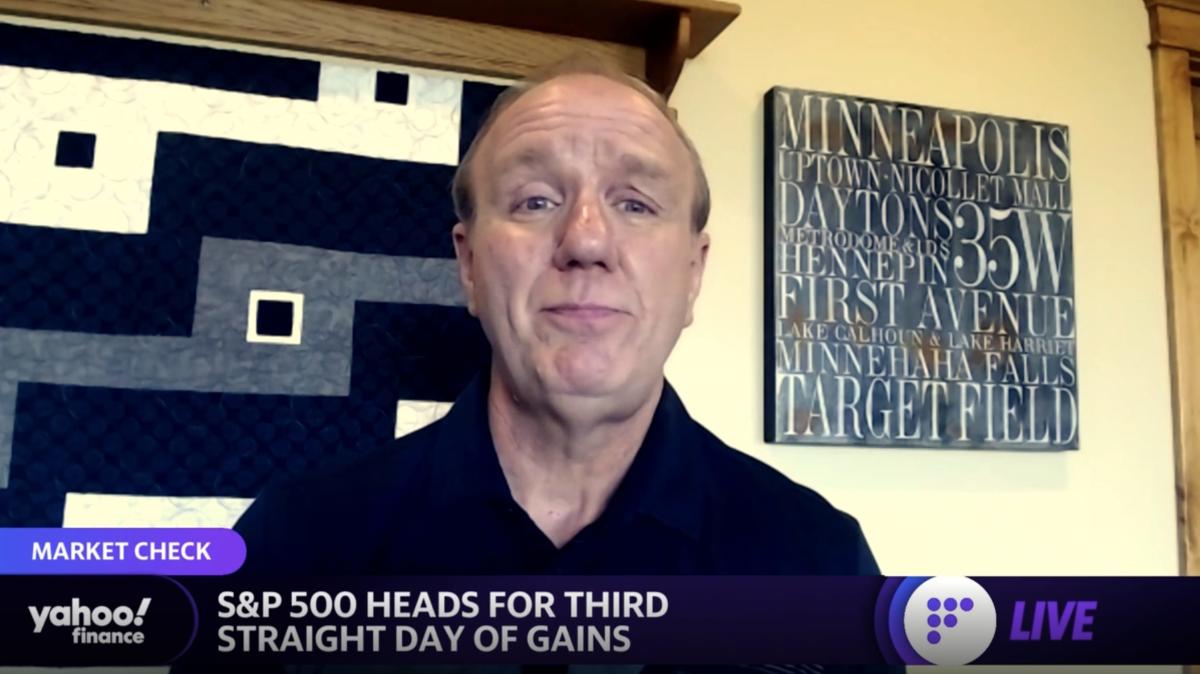 RACHELLE AKUFFO: Well, let’s get more of a breakdown with that market reaction now with our guest, Jim Paulsen, the Leuthold Group chief investment strategist. Good to see you, Jim. So obviously, we saw that turnaround in the markets from the down it was having in the morning. How are markets reacting, given Powell’s comments and some of these other recession fears that are going?

JIM PAULSEN: Well, you know, I think the biggest thing in the room here in the last few days has been the bond market. Bond yields have stopped going up. Better than that, they’ve been coming down. The 10-year yield is back to about 3.15. The two-year’s getting close to breaking back down below 3%. And that is really because of what’s going on in the commodity markets, I believe.

Outside of energy in the last several months now, the soft commodities, agriculture, livestock, industrials, commodities, all those commodity prices have been flat to down now over the last three months minimum. And the only remaining thrust from the commodity market into inflation has been energy prices. Well, even that now, as you just said, is rolled over with WTI now trading below 107, for example. So with gas prices and energy prices coming off, I think there’s a move downward in inflation expectations. Most of the breakeven rates in the bond market have really come down.

And tell you what, we’re getting more worried about recession at this point than we are about inflation because I think more and more, inflation looks like it has peaked. And I really think that the stock market was struggling with the idea of ​​much higher yields. And what this does, with the free market yields coming down, is it takes some of the pressure off stocks. And then it also sort of makes you question how much more the Fed’s going to actually have to lift rates– probably far less than what people are anticipating just a couple of weeks ago. So I think that’s been the big catalyst under this market lift, if you will, in the last couple of days.

SEANA SMITH: Hey Jim, we had Philadelphia Fed President Patrick Harker on Yahoo Finance earlier today. And he was talking about the Fed’s plan, talking about where we are in this economic slowdown. I want to play a quick sound bite from what he had to say earlier this morning.

SEANA SMITH: And Jim, he did go on to say he does see a modest contraction in growth, but he does expect the labor market to remain strong. Given that and what you were just saying just in terms of some of the slowing growth that you are seeing, do you think we’ll likely see a 50 basis point hike at that next meeting?

JIM PAULSEN: You know what? Gone. I think that the Citigroup Economic Surprise Index has fallen to, like, minus 70. It is at the lowest level right now that it’s been since the start of the post-pandemic recovery in early 2020. So economic momentum has clearly slowed. Most days now with economic reports, they’re weaker than expected, including, like, claim numbers in the job market, certainly, the housing numbers, but even things along the line of the leading economic indicator and the NAPA ISM reports.

And so the broad-based brush of the economy is it’s slowing down pretty dramatically. I think that’s going to change the Fed’s trajectory, particularly if energy is now rolling over, and the national gas price average comes down. I think people are getting less concerned about inflation. So I suspect they’re going to do a 50. And quite frankly, we’ll see, but that might be it for a while, too. That’s the other possibility, depending on whether the inflation reports do, in fact, get better here in the next few months, which I believe they probably will.

I think you may hear more comments like we just heard from other Fed members, that they’re starting to see a foot change in economic momentum and even in the inflation evidence. And maybe a 50 basis point is going to be enough. And certainly, the stock market’s reacting a little to that as well.

DAVE BRIGGS: You’re suggesting maybe a pause in September. And how do you think markets would react to that?

JIM PAULSEN: Well, I think that it’s not– that’s not baked in for sure, Dave, or anything like that. But yeah, I’m starting to lean that way. Core inflation has rolled over now year on year for the last two months running. Core CPI, core PPI, core PCE. That has rolled over for two months. That’s the first time they’ve all rolled over at the same time since this began. As I mentioned, the commodity thrust used to be all commodity markets. Now it’s just energy, and that’s even wanting.

So I think there’s growing evidence that inflation has peaked, and it’s going to become more prominent here as we go through the rest of the summer. I think that we’ll get much more concerned about recession by the end of summer than we are about inflation. And it could even be further years out maybe. The Fed will not only pause, but we’ll see what happens to long-term 10-year rates. Maybe they’ll even back off and ease. Who knows?

RACHELLE AKUFFO: Indeed. I mean, we see these comments come out in between meetings from some of these Fed members. Do you think that is helpful for markets in sort of trying to gauge their expectations? Or is less more? Should they just be watching what the Fed actually does?

JIM PAULSEN: Yeah, that’s a great question. I’ve been in business for 40 years. And I’m an economist by training. [INAUDIBLE] a PhD program in economics, the whole theory of the day was that the Fed had to be absolutely mum. They could never talk because the only way monetary policy could affect the markets– this was in the 1970s– was if they shocked the market. And this idea of ​​a communicative Fed and not wanting to surprise anybody is just a foreign thing to somebody that was educated in the ’70s, for example, because it was exactly the opposite theory.

And I don’t know, but the evidence I see, what do these Fed meetings really do, except elevate the VIX Volatility Index? I just– every meeting, VIX goes up. The market struggles. Then when the meeting’s over, it does a little better. And I just– I wonder what the heck press conferences by the Fed and every talking head going around talking out of the different sides of their mouth really is helpful in helping investors decide what’s going to happen.

I tend to think that you’re better off watching the Fed’s boss. And the Fed’s boss is what’s going on in the economy. And then the next boss is the bond market. And I’ll tell you what both of those are saying right now, is the Fed better not overdo the tightening because we’re already telling the Fed that they better start to back off.

SEANA SMITH: So, Jim, at this point with sentiment right now, it’s swung so negatively. We saw that reflected in the markets last week with that steep selloff that we got in all three of the major averages. Where are you seeing opportunity, or more importantly, I guess, what should investors be doing right now at this point, when there is still a lot of uncertainty out there when we talk about inflation? And then like you were saying, maybe the focus should now be really on the chances of a recession.

JIM PAULSEN: Well, I’ll tell you. What I’ve found in my career is, there’s always uncertainty. I hear people say, we’ve got to wait till this clears up. Ah, nothing ever clears up. If that clears up, there’ll be something else to be uncertain about. What I think is that when there’s great uncertainty, often, there can be great opportunity in that. But because there’s so much uncertainty, what do you think that’s doing? It’s causing buyers to wait. It’s causing sellers to sell. It’s causing– it is the result of bringing the valuation of the S&P 500 below average now since 1990, both on the trail and forward earnings overall.

The great uncertainty has lifted defensive stocks and reduced a lot of the more aggressive stocks in the marketplace. I think some of the best opportunities occur when there’s the greatest uncertainty. You generally have the greatest uncertainty, the greatest fear at market bottoms. And it seems to be that that is kind of where we’re much closer to that environment. I’m not saying the market couldn’t go down more. There’s a lot of smart people who think it could. But this feels a lot more like developing a market bottom to me than a market top.

At market tops, there’s nothing but bravado everywhere. And you certainly don’t see that today. You’ve got corporate CEOs talking about the security of recession. You got policy officials talking about recession. And I think if we do have a recession, it’s going to be one of the best forecasted ones we’ve ever had. So I kind of think we’re going to avoid that. That the economy is slowing down, but it won’t recess. That inflation is gonna– we’re gonna get more comfortable with that. And if that means rates stop going up, then I think the stock market’s going to have a pretty nice rally before the year’s out. Probably won’t get back to where we were at the start, but still, a pretty nice rally from here.

DAVE BRIGGS: So you think this is at or around our bottom. And the multiples are around 15 and 1/2. You think things are on sale right now?

JIM PAULSEN: Gone. I really do. You know, you’ve got to think about, like you say, 15 and 1/2, Dave, that– the average moldable, going back to 1990, is around that 17 level, or 17 and 1/2, something in that ballpark, on comparable trailing estimates. And my point about this is, is that yeah, could it go lower? Absolutely. But if you look at the world we live in where we still have a rate structure that’s 3% or less, by and large, I just don’t think we’re going to go back to single digit multiples like we did in the 1970s , particularly if inflation does, indeed, roll over.

You can’t buy when you feel absolutely comfortable, because that, in itself, tells you something. If you’re that confident, then maybe you ought to just stay away. But when you’re nervous, I think it’s a good time not to go crazy with real aggressive stocks, but to look at high quality companies that have earnings, that have a business. And if you’re more comfortable with it, maybe a dividend yield. But more importantly, to be in the market at times when most people are scared of it because that’s when the greatest returns will generally occur in the stock market.

SEANA SMITH: Jim Paulsen, always great to hear from you.

DAVE BRIGGS: I love that.

SEANA SMITH: Thanks so much for taking the time to join us.