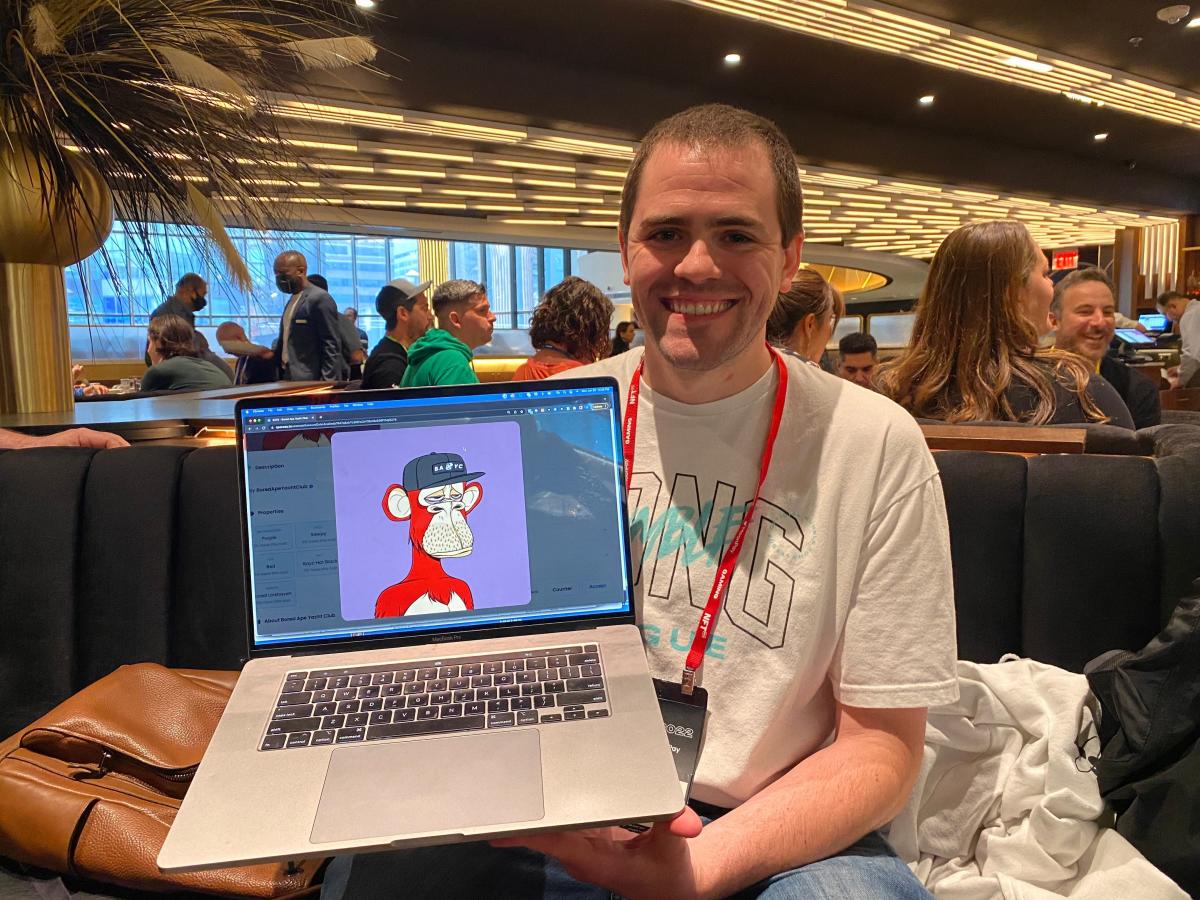 When Keith Martin bought his first Bored Ape Yacht Club non-fungible token in May last year, he paid less than $500 and seemed certain to flip it for a profit, given the market was just starting to boom.

But things didn’t turn out that way and Martin clocked a loss on his maiden trade.

With a lesson under his belt, he soon bought another one for around $1,700, or 0.64 ETH, this time, determined to hang on to it, given his belief in the prospects for the digital assets market.

“After I sold initially, I immediately bought back another Ape for more money, because I really didn’t want to miss out on what could happen next,” Martin, 31, told Insider at the NFT.NYC conference Monday.

At the time, one ether token was worth about $2,700. Today, it’s worth about $1,111, having fallen victim to a vicious route in cryptocurrencies this year. In the meantime, Martin’s prized Bored Apes NFT is worth roughly $111,000 at current market prices. Martin’s NFT transaction receipts were reviewed by Insider.

“There wasn’t a lot going on back then, whereas nowadays there’s like 10 new projects a day,” Martin said. “A year ago, there was like only one new project every few days. So being on Telegram and Twitter, a lot of people at the time were saying Bored Ape would be the next CryptoPunks, so I bought one.”

Martin, who goes by IllusiveApe on Twitter, he had co-founded a marketing company in 2017. But once he started getting into NFTs about a year ago, his passion shifted to digital assets.

In June, he quit his job at the company he helped launch and is now working for Tribe, a Web3 company, because his enthusiasm for the NFT sector had become his prime focus.

“I certainly view the crypto space and NFTs as the future, so I figured there’s no better time than now to get involved,” he said.

He added that while he started off as an investor and trader, he considers himself more of a collector now, because he has no plans to sell his favorite NFTs, including his original Bored Ape NFT, as well as a CryptoPunk NFT that he bought for around $51,000 in May last year.

Martin maintained that while he’s doing much of the same marketing work for Tribe as he did for his previous company, the work is more exciting now because he sees Web3 as the future.

NFTs today, he added, may seem like they are only about art and profile pictures, but they are underpinned by sophisticated blockchain technology.

“Name you industry, NFTs are going to disrupt it,” Martin said. “Look where some of the smartest people are going, big time developers, anyone in the computer science space. The brightest minds are all moving into this space. That makes me really optimistic.”

NFTs had a monster year in 2021, but weekly sales have declined by more than 80% from a January peak of nearly $1 billion, according to data from NonFungible.com. And the market cap for cryptocurrencies, meanwhile, have recently dipped below $1 trillion after surging past $3 trillion last year.

But even amid the bear market, Martin said he plans to stay the course with buying more crypto and collecting more NFTs.

“I ask myself about my son, who’s already swiping on virtual screens,” he said. “Would he rather get bitcoin or a bar of gold in the future? And the answer seems obvious to me.”